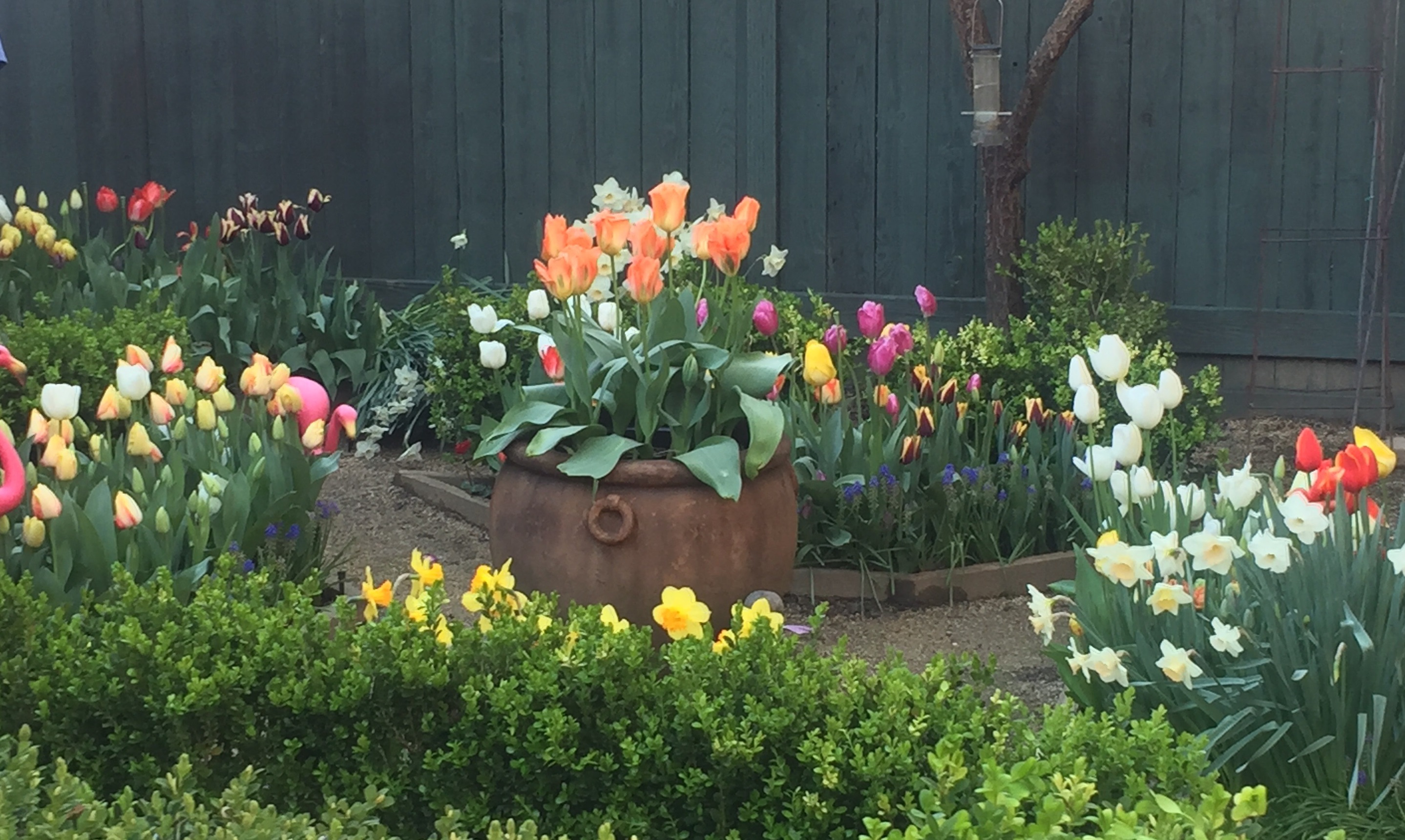 I have been planting bulbs in my Marin County backyard garden each December for about ten years. The plants come into flower in the month of March, a time when temperatures have the potential to climb into the 70s and low 80s. To ensure my clients have not only the best products, but also know the best varieties to grow, I’ve taken to conducting trials with a number of the tulips, grape hyacinths and daffodils I import from Holland. In my annual trials, I strive to determine earliness to flower, number of days in flower, and heat tolerance. To do this, I plant the same bulb in various places in the yard, each bed offering more or less sunlight than another. Unlike our recent drought years, this year’s rainfall surpassed everyone’s expectations, so it was fortuitous that I loosened the soil for easy drainage. I also planted using deeper beds and, unlike in years past, used only pre-cooled bulbs.

Happily, this year’s garden surpassed my expectations with earliness and days of color, in spite of this year’s warm March temperatures.

I’ve listed the most impressive varieties below: 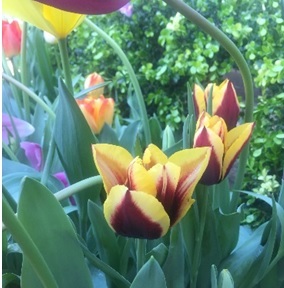 Of the twenty-nine tulip varieties, those that made the biggest impact in my garden were the Gavota. This maroon and yellow 16” Triumph tulip came into bloom on very short stems on March 13 and the color stayed strong until March 29. Interestingly, after its initial bloom, the Gavota stretched to double its height while maintaining its structure and color perfectly, resisting our heavy rain and wind. While it was not the longest blooming of the trial varieties in my garden, it was certainly the most dramatic with its complementary color. It grew well in all the sun conditions it was planted, which was also a pleasant surprise!

The closest runner up to the Gavota was the Rembrandt Mix, which provided the longest blooming tulip, coming in at 32 days. The mix could be planted in a bed that needs to be in color over an extra-long period of time. Most flowers in this mix have streaks in the petals and are white/red to yellow/red in color. In my garden, the La Courtine Single Late Tulip came into flower on March 17 and was still in flower on April 19. This tulip did well in every area – from little to moderate to all-day sun. 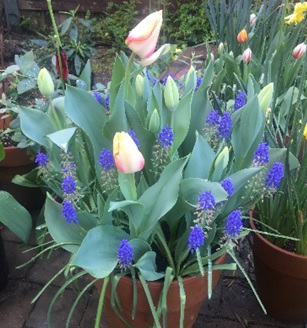 A new trial member in my garden, the Muscari Armeniacum was this year’s best growing Grape Hyacinth. It exceeded my expectation with earlier and bigger flowers than I’ve ever seen. They first flowered on March 4 and was still in full bloom as late as March 24, along with the tulips. The Muscari gave the pot an additional 16 days in flower. Typically used to edge a flower garden, I found this flower made a great potted display with the Beauty of Spring tulips you see planted in the image, left. I feel it would also pair well with a number of bulbs, including both tulips and daffodils. It did well throughout my garden and the sun level was not a factor in its growth nor its floral longevity. 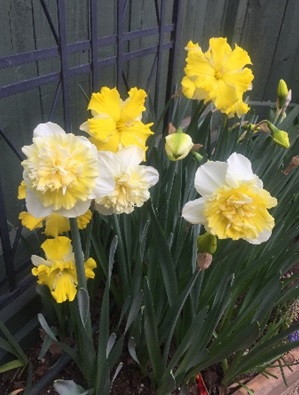 I planted seven varieties of daffodils and all did quite well. The two that stood out for me were the showy Split Corona Banana Daiquiri, which is known to have large blooms with uplifting faces, reminiscent of a hibiscus.  This was in flower from March 4 to March 28. Resting on a 16” stem, the large bright yellow flowers measured 3” to 4” across. This daffodil did well in all sun levels. As you can see in the photo, left, the Banana Daiquiri was planted along with Ice King Double Daffodil, which was in flower from March 6 to March 28. These hardy and large, long-lasting flowers had the color power to be seen over a long distance in the garden. They do well in various environments, including pots and beds, and offer early color, longevity, and variety to spring gardens.

Below is the Gander’s Rhapsody and Concerto Tulips bordered by the Muscari Armeniacum. 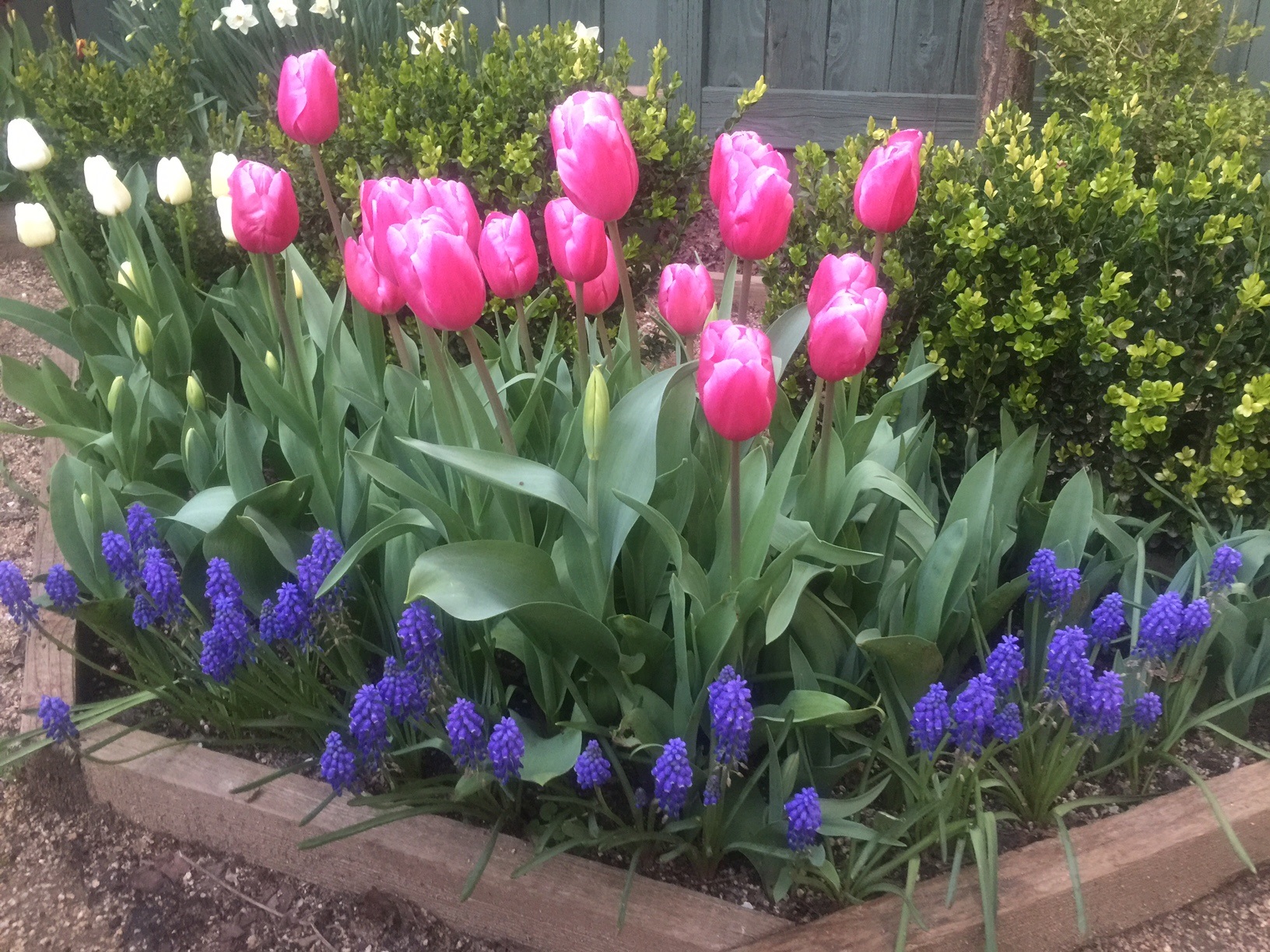 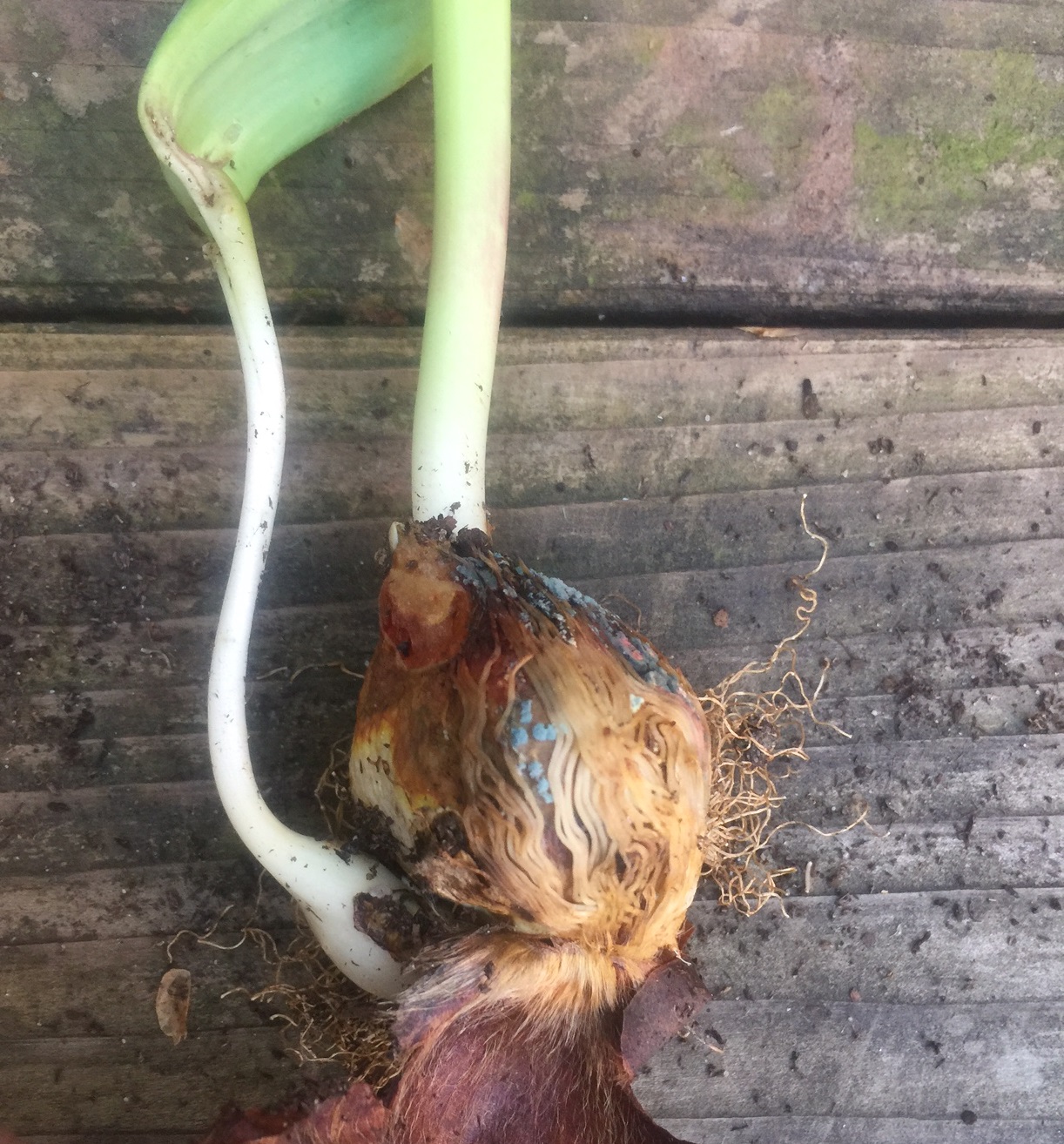 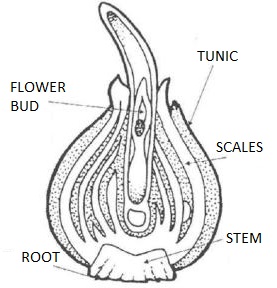 Some cut flower growers remove the Tunic from their tulips before planting.

According to one source, this can increase flower production by 5 to 15 percent. Tunic damage occurred in some varieties as the roots grew up under the Tunic and made space for water to collect. In my trial garden, loss in the affected variety were 100%.